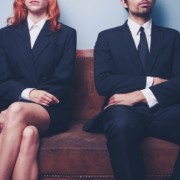 When two people are in agreement about the terms of divorce, the divorce proceedings are relatively simple.  Typically, the partys’ attorneys will draft a divorce agreement (highlighting things such as child custody, spousal maintenance, property division, etc.), and both parties—as well as a judge—will sign off on it.

However, when an agreement is made in duress—or as a result of coercion—it may not be binding. That’s exactly what happened to Terrence Howard, according to news reports. Now, a Superior Court judge has overturned Howard’s divorce settlement agreement.

The Legal Information Institute of Cornell University Law School defines duress as, “When a person makes unlawful threats or otherwise engages in coercive behavior that causes another person to commit acts that the other person would otherwise not commit.” In terms of divorce, duress could include threatening, bribing, or otherwise coercing a partner to sign a divorce agreement or settlement agreement against their free will. Duress is usually not defined as merely a threat to embarrass.  It must be more serious and have repercussions, such as physical or financial harm.

Once a divorce settlement is reached, reopening the case can be complicated. However, it is possible, as is the case for Terrence Howard, whose divorce settlement was recently overturned. Howard contends that he only signed a 2012 divorce settlement agreement after threats from his wife at the time, Michelle Ghent, that she would leak private details about him. Judge Thomas Trent Lewis found evidence of coercion, meaning that Howard and Ghent will have to renegotiate the financial terms of their divorce.

In most divorce cases in Massachusetts and New Hampshire, a finalized order cannot be reopened. If there is proof that an order was agreed to under duress request to reopen a divorce case may be filed if it can be proven that fraud, duress or other misconduct present.

How a Massachusetts & New Hampshire Divorce Attorney Can Assist You

If you believe that you entered a divorce agreement while under duress and would like to file a motion to reopen your case, you’ll need a skilled divorce attorney to assist you. At The Law Offices of Attorney Michael F. Mimno, skilled family law attorneys in New Hampshire and Massachusetts, can serve as your advocates when reopening a divorce case. If you’ve been coerced into an agreement that’s not advantageous for you, you have the right to take action. Contact us online today, or call us now at 978-470-4567 or 603-479-1152 for a free case consultation.

Only a Matter of Time: With Same-sex Marriage Comes Same-sex Divorce