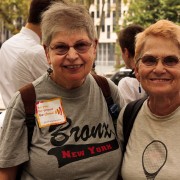 However, while getting married has been a right in a handful of states for years, divorce has been more complicated; while many people traveled to states that recognized same-sex marriages to say, “I do,” getting divorce in a state that didn’t recognized same-sex marriage was nearly impossible. With more and more same-sex couples saying their wedding vows, it’s not unreasonable to assume that there will also be an increase in the number of same-sex divorces. For some, the Supreme Court decision was not only a reason to celebrate the right to get married, but also the right to get divorced regardless of where you live.

Imagine getting married only to, months or years later, realize that you can’t get divorced. This phenomenon of being ‘wed-locked’ has been a reality for hundreds of same-sex couples throughout the United States. For states that didn’t recognize same-sex marriage (even after the Supreme Court ruling, some areas of the nation are still refusing to recognize homosexuals’ rights to wed), seeking a divorce was impossible. And even in states that did recognized same-sex marriage prior to the Supreme Court decision, many of those same states imposed a residency requirement in order to get divorced. As such, same-sex couples who were married, but were not living within a state that recognized gay marriage, were unable to legally separate from one another.

The Supreme Court decision not only provides same-sex couples with the right to marry and divorce in all 50 states, but it also has some larger implications, too. For example, prior to the decision, only heterosexual couples could utilize the IRS tax deduction for alimony payments; now, both same-sex and opposite-sex couples will be legally able to do so. Additionally, homosexual couples will be able to divide retirement and pensions plans during a divorce without severe penalties and taxes.

Of course, being able to get divorced also affects things like child custody and child support, too. In Massachusetts, New Hampshire, and now the rest of the nation, same-sex couples who have a child or children and are seeking divorce will be subjected to the same set of laws that govern these issues in heterosexual divorces.

How a Divorce Attorney Can Help You

If you’re in a same-sex relationship and are considering divorce, the family and divorce lawyers at The Law Offices of Attorney Michael F. Mimno can help you understand your rights. From alimony payments to division of property to parenting plans, our Andover and Londonderry family law specialists are ready to guide you through the divorce process. To learn more about our services and why you need a lawyer during a divorce, call us at 978-470-4567 or 603-479-1152 today.

During Divorce Settlements: What about duress?